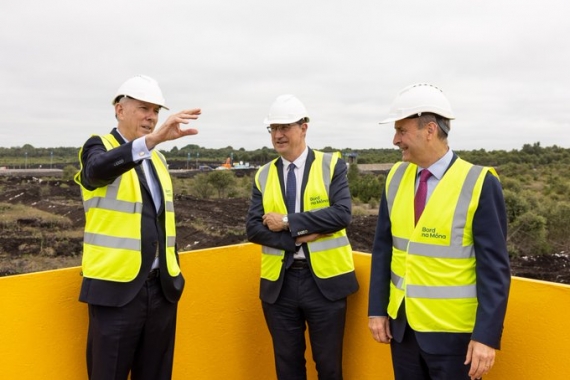 Taoiseach Micheál Martin and Minister for the Environment, Climate and Communications, Eamon Ryan yesterday joined Chief Executive at Bord na Móna, Tom Donnellan at the company’s Cloncreen Wind Farm to announce details of over 1400 jobs being created by the company, mainly in the midlands region.

Bord na Móna has created over 550 jobs over the past 18 months as it develops  renewable energy, recycling infrastructure and Carbon Storage through peatland rehabilitation. Bord na Móna plans to create an additional 885 jobs in the coming 4-5 years through further expansion of its climate solutions businesses, partnerships with third parties and the construction of a significant portion of Ireland’s renewable energy infrastructure. Direct employment within the company will return to pre-transition (2018) levels within the next five years.

Speaking at the announcement yesterday, Taoiseach Micheál Martin said, "Our world has changed dramatically since Bord na Móna was established and Climate Change is now the key long-term challenge we face. Building on its rich legacy, Bord na Móna has reinvented itself to meet that challenge with the continued development of over 1400 climate solutions jobs. I wish Bord na Móna, its employees and the communities it serves, every success in the years ahead."

Chief Executive of Bord na Móna, Tom Donnellan added, "Bord na Móna’s transformation shows that people and planet can both win in the coming decades. We are in the climate solutions business now and today’s announcement is tangible evidence that we are, and will continue to be, a leading employer in the midlands into the future."