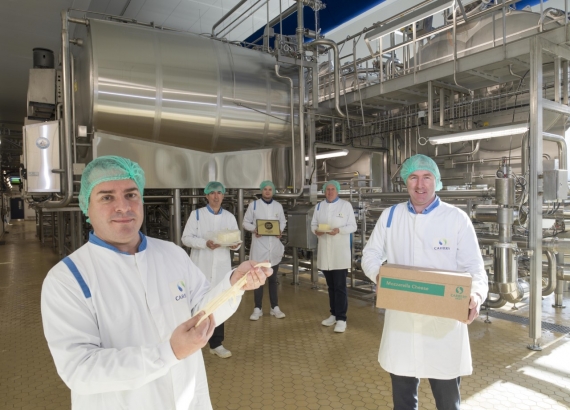 Carbery Group has today announced the completion of the expansion of its Headquarters in Ballineen, West Cork. This means the beginning of production of new cheese varieties (mozzarella and grilling cheese) for the food service market in Europe and Asia.

Best known for producing Dubliner Cheese and Carbery Cracker for the Irish domestic market as well as cheese for export under the Ornua brands, Carbery Group currently produces 55,000 tonnes of cheese annually or 25% of all cheese made in Ireland. This is set to increase to 64,000 tonnes with the new expansion now in place.

Supported by a €78m investment in a new facility at their headquarters in Ballineen, Co Cork, the new ranges of cheese will go to market under the brand name ‘Carbery Dairy’, to be sold in existing and new markets with a particular focus on growing markets in Asia.

The expansion in Ballineen is supported by a new state of the art facility, with specialist equipment from New Zealand, Italy, UK, Denmark and Minnesota in the US. The Group will initially be focusing exports on customers in Asia, including China and Japan, and mainland Europe.

The move will create 15 new positions bringing workforce in Ballineen, West Cork to around 300 (and almost 800 people globally).

Speaking this week, CEO of Carbery Group, Jason Hawkins said, "Our cheese diversification strategy has been in the works now for a number of years, so it’s great to see all our planning and efforts come to fruition. It’s a significant investment for us, in financial terms, but also in terms of our strategy, our people and market research."

He added, "Our teams across the business have been working extremely hard on this project and we are really looking forward to bringing our products to new markets and returning value on this investment to our farmer shareholders. This diversification will create new markets and value for our West Cork milk suppliers."