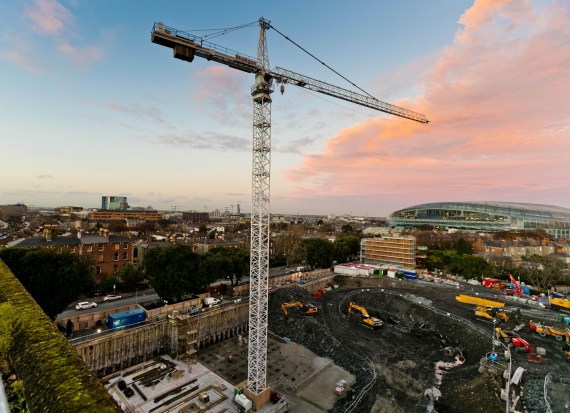 Bank of Ireland has today predicted that the Irish economy is projected to grow by 3.8% next year and the UK by 1.6%. The latest Ireland Outlook from Bank of Ireland highlights the strong momentum in the Irish economy, with activity in the first three quarters of 2017 ahead of expectations and high frequency data indicating that there has been a good start to this year.

In its UK Outlook, the Bank notes that the UK economy has been expanding at a moderate pace against the backdrop of the Brexit negotiations. This is expected to continue, with GDP growth of 1.7% forecast for 2018.

While Brexit uncertainty has been weighing on business sentiment, firms were in a more upbeat mood in January and the majority remain on a growth trajectory with two in three looking to expand their business in the next 1 to 3 years. Some unwinding of the globalisation factors that boosted investment in recent years is likely over the next while. This will weigh on the total figures, but with the domestic and global economies growing, underlying investment is expected to expand at a solid pace.

In the UK, Brexit uncertainty has been a drag on business investment and is expected to continue to be over the forecast horizon. The need to improve efficiency and expand capacity has contributed to some improvement in firms’ investment intentions lately however, with the better external environment helping as well.

Retail sales in Ireland rose by 4.3% last year and while new car sales started this year on a softer note, used imports were robust. Household confidence has been on a broad upward trajectory in recent months, with the Bank of Ireland Consumer Pulse posting a two year high in January. On the labour market front, employment growth averaged 2.8% year-on-year in Q1-Q3 2017, taking the number at work to 2.2 million and not far off its previous peak, and at 6.1% in January, the unemployment rate remains on a firm downward path. Further job gains and rising incomes are expected to underpin consumer spending increases in the order of 3.0% this year and next, while the unemployment rate is projected to fall to around 5.0% by the end of 2019.

The report shows that the situation in the UK is different; with retail sales softening and household confidence at a low ebb. At 3.0% in January, inflation is still well above the Bank of England’s target and will weigh on households’ purchasing power in the period ahead, notwithstanding ongoing job gains. Reflecting this, consumer spending growth is expected to be relatively weak at 1.0% this year and 1.3% next year.

Irish exports were up 5.1% on an annual basis in the first three quarters of 2017. Services led the way, with goods staging a rebound in the third quarter (having been weighed down by weak contract manufacturing activity in the first half of the year). Foreign direct investment flows were stable last year, with the IDA securing a number of Brexit related investments. Looking ahead, export growth of 5.2% is forecast for this year and 4.5% for next year, underpinned by solid activity in our main trading partners.

In the UK, the depreciation of sterling is providing support, with exporters also benefitting from the upswing in the global economy.

Commenting on the report, Group Chief Economist at Bank of Ireland, Dr Loretta O’Sullivan said, "Further job gains and rising incomes are expected to underpin solid consumer spending in Ireland. Underlying investment, especially construction activity, is set to expand as well, with exports continuing to benefit from the improving global economy. The global upswing is also supporting UK exporters, as is the weak pound, and our forecasts allow for some rebalancing of the UK economy, with softer consumer spending partially offset by firmer exports."

She added, "As always there are risks to the outlook, not least Brexit uncertainty. This is the big issue for the UK and is also a cloud on the horizon for Ireland, along with uncertainties related to the external policy environment and exchange rates. These aside, it is clear that the Irish economy is back on its feet with a range of indicators above their previous peak and others not far off."