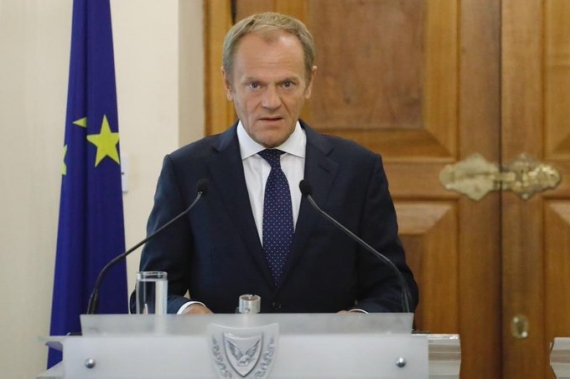 European Council President Donald Tusk said on Friday the latest round of Brexit talks carried no guarantee of success and time was nearly up for a deal to be reached by Oct.31, tempering a burst of optimism after the British and Irish prime ministers met.

"I have received promising signals from the Taoiseach that a deal is still possible. Technical talks are taking place in Brussels as we speak," Tusk said in the Cypriot capital Nicosia.

"Of course, there is no guarantee of success and the time is practically up. But even the slightest chance must be used."

Varadkar and British Prime Minister Boris Johnson unexpectedly said they had found a pathway to a possible deal in a meeting in northern England on Thursday. The chief Brexit negotiators of the European Union and Britain then met on Friday morning in Brussels.

The United Kingdom is due to leave the world's biggest trading bloc on Oct. 31 and despite the flurry of activity, it remains unclear on what terms it will leave or indeed whether it will leave at all.

In a tumultuous week, Brexit negotiations have shifted wildly, starting with a public row between London and Brussels.

Tusk said he had previously told Johnson that unless a workable solution came from London by Friday Oct. 11, he would announce that a deal was all but impossible at a summit of all EU leaders next Thursday and Friday.

Varadkar told Irish reporters after his meeting with Johnson: "I think it is possible for us to come to an agreement, to have a treaty agreed, to allow the UK to leave the EU in an orderly fashion and to have that done by the end of October."

In a joint statement, the two leaders said they could "see a pathway to a possible deal," though officials on both sides were silent about what compromises - if any - had been made to break the Brexit deadlock over Ireland's border.

To get a deal done, Johnson must tame the complexities of the Irish border before getting the approval of Europe's biggest powers - and then sell any deal to the British parliament, which he suspended unlawfully last month and where he has no majority.

Johnson, the face of the 2016 Brexit referendum campaign, made no further comment on the meeting with Varadkar.

Ireland is crucial if a deal is to be done to avert a potentially disorderly Brexit that would hurt global growth, roil financial markets and could even split the United Kingdom.

Dublin will have to consent to any solution to the hardest Brexit riddle of all: how to prevent the British province of Northern Ireland becoming a backdoor into the EU's markets without having controls at the border.

The Irish border has been largely invisible since British army checkpoints were taken down after a 1998 peace deal largely ended the violence between members of the region's pro-British majority and an Irish nationalist minority.

Johnson last week proposed an all-island regulatory zone to cover all goods. Northern Ireland would leave the EU's customs area along with the rest of the United Kingdom - and the province's institutions would be able to opt to exit the regulatory zone - a step too far for Ireland and the EU.

It was unclear what Johnson agreed with Varadkar.

The Democratic Unionist Party (DUP), which supports Johnson's minority government, would have an effective veto on post-Brexit customs checks on the Irish border under proposals put forward by Johnson last week.

Education minister Gavin Williamson restated the government's line that Britain would leave the EU on Oct. 31, come what may, telling ITV: "We need to see the European Union shift." (Reuters)