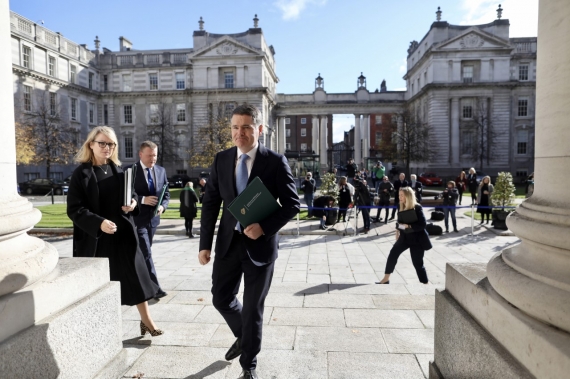 Ireland's government offered more support on Tuesday to those hit hardest by some of Europe's toughest COVID-19 restrictions in a budget stimulus package that it said was unprecedented in the history of the state.

Like other countries, Ireland has spent aggressively to contain the pandemic crisis with billions of euros in emergency jobless benefits, wage subsidies and business loan guarantees, turning last year's budget surplus into a forecast deficit of 6.1% of gross domestic product (GDP) for 2020.

It also faces the prospect of a disruption of trade with neighbouring Britain if progress is not made rapidly on a post-Brexit trade deal between Britain and the European Union single market, which Ireland belongs to.

With the damage to the state finances not as bad as feared, Ireland will spend big again next year, setting aside 3.4 billion euros in a Brexit and COVID-19 recovery fund, cutting the VAT cut for the hospitality sector to 9% from 13.5% and extending a commercial rate holiday.

"We have faced numerous difficulties since independence (a century ago), but never one like COVID-19," Finance Minister Paschal Donohoe told lawmakers, meeting in Dublin’s Convention Centre because the houses of parliament are too small for social distancing.

"Our message is clear. Yes, the test we face is daunting, further demanding choices await. And yes, we will prevail. We will come through this. And from the ashes of the pandemic, together, we will build a stronger, more resilient Ireland."

The deficit is set to fall to 5.7% of GDP next year and Donohoe said the government must manage and reduce its borrowing levels over the coming years to return to a balanced position.

While Ireland's central bank forecasts that GDP may fall by as little as 0.4% this year, the relatively robust performance is being driven by the less affected export sector and masks an uneven recovery that has left unemployment stuck at around 15%.

After a tightening of lockdown restrictions last week - banning indoor service in pubs and restaurant nationwide - one of the measures will hand firms much larger grants of up to 5,000 euros per week if their turnover is severely damaged.

Donohoe said the temporary wage subsidy due to end in April 2021 will be replaced by a similar programme running to the end of next year, and that the government would apply for EU funding that could cover up to 2.5 billion euros of the cost. (Reuters)