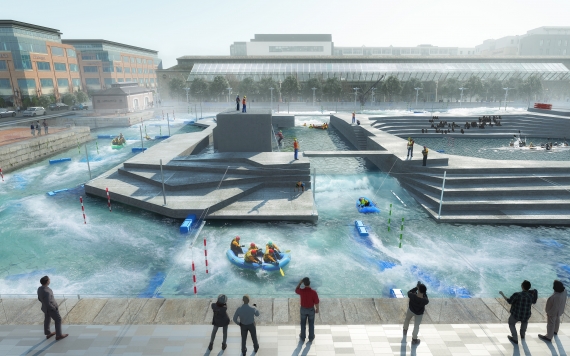 Dublin City Council has this week purposed a world class white water course for rafting and canoeing in George’s Dock, off Custom House Quay. The proposal would see a Swift Water Rescue training centre based around a floodable street with a mock rescue village for use by Dublin Fire Brigade and other emergency services.

In addition, the proposal states that two new high quality buildings would be constructed on the campshire at Custom House Quay to replace the current Docklands Office building. One of these buildings would serve as a new City Council Docklands Office, the other building would service the White Water facility and would also cater for public access to water activities on the River Liffey.

The estimated cost is €22m. The Council say the facility would be funded by a combination of grants, development levies and City Council borrowing. The White Water Centre is expected to generate a significant operating surplus that would cover the cost of loan repayments to the City Council.

According to Dublin City Council, "Overall the project will provide a major new city centre tourist attraction offering access to white water rafting and to water activities on the River Liffey. It will also serve as a training centre for canoeing and other water based activities. It will provide a Swift Water Rescue training facility for emergency services and other local authority services. Finally, it will support a major community development programme and local employment."