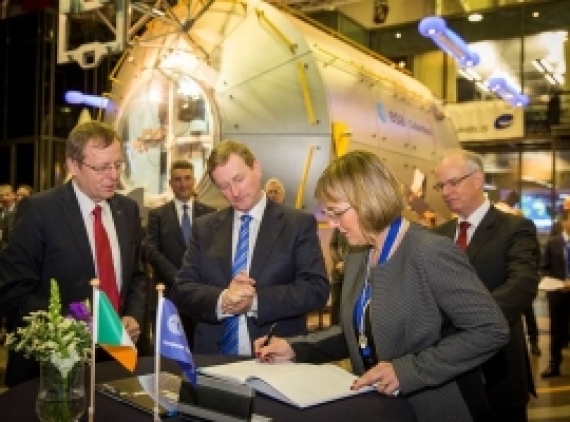 Ireland will invest over €90 million to 2021 in strategic ESA space programmes which will put high-tech Irish companies and researchers in a position to exploit the growing Global space economy to the maximum, it was announced today.

The Irish Government's investment in ESA is supporting strong growth in the sector in Ireland with the number of companies in the sector expected to expand to over 80 by 2020, generating annual revenues growing from over €75 million in 2015 to over €150 million by 2020.

This investment will also double employment with the creation of over 1,000 high value technology jobs in Irish industry by 2020. Companies involved with ESA are also projected to increase combined turnover from €274 million to over half a billion euros by 2020.

Minister for Training, Skills and Innovation, John Halligan TD, along with Ministers with responsibility for space within the 22 ESA Member States and Canada are gathering in Lucerne, Switzerland for a meeting today.

This meeting is held every three years and gives Ireland the opportunity to input into setting the agency’s strategies and policies. During these ESA Members meetings, the direction for the coming years is decided upon and any additional budget for the future is allocated. Ministers also agree to start new programmes or bring an end to old programmes.

Supporting this growth, the Irish Government has confirmed its commitment to investing in space programmes at the ESA Ministerial Council held in Lucerne where Ireland’s investment will underpin further expansion of this sector in Ireland.

Among the programmes in which Ireland will be continuing to participate in will include Earth Observation, Satellite Communications, Next Generation Launchers, such as Ariane 6 and Vega C, and Satellite Navigation.

Speaking at the ESA Ministerial meeting in Lucerne, Minister for Training, Skills and Innovation, Mr. John Halligan TD said, "The European Space Agency plays a critical role in developing the Irish space industry, particularly the SME and High Potential Start-Up sectors. This is an exciting time for the Irish space industry and with the support of my Department and Enterprise Ireland the Irish space sector is set to expand at an unprecedented rate over the next few years."

The Minister continued, "My Department’s investment in ESA will manifest itself through new companies entering the space sector, scaling of existing companies and the further expansion of a strong cohort of high technology start-ups, leading to increased sales, exports and jobs. As I have previously said, it is an exciting time for Ireland as employment is set to double in the Irish space sector over the next number of years with 1000 high value technologies jobs expected."