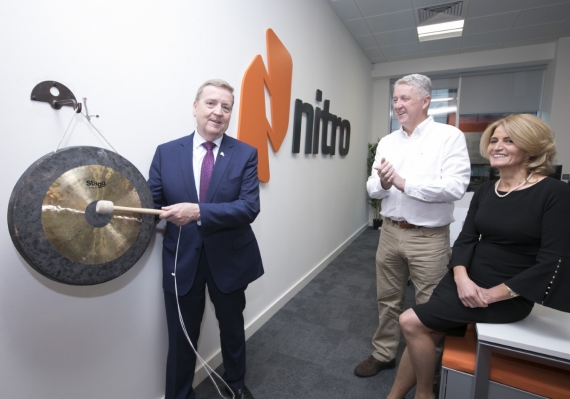 Nitro has today announced the opening of a new EMEA headquarters in Dublin. Centrally located along the banks of the Grand Canal in Dublin 2, the larger office space spans over two floors at Charlemont Place and sets Nitro up for its next stage of growth in the region.

The global company specialises in document productivity solutions and established its first office in Dublin in 2013 with just three employees and has since expanded.

In 2014, Nitro’s leadership team committed to creating 50 new roles in Dublin within the first two years of operation and now employs more than 70 people in Dublin. The new office space allows the company the capacity to create 70 additional jobs over the next two years.

Speaking at the official opening of the new EMEA headquarters today, Minister for Trade, Employment, Business, Pat Breen said, "This new space will allow the company to double their headcount which will set them up for their next stage of their growth. Dublin is now rightly regarded as the Tech Capital of Europe and announcements like todays from Nitro reaffirm that position. I wish them well in their newhome."

VP of Engineering at Nitro, David O’Donoghue added, "Dublin has done a tremendous job bringing technology organizations of all sizes to the city. With an abundance of talent in Dublin, Nitro is committed to investing even more in our team here and to make Dublin our core development center. With an amazing culture, meaningful work to offer talented people, and now a new, beautiful office here. I think Nitro really stands out."