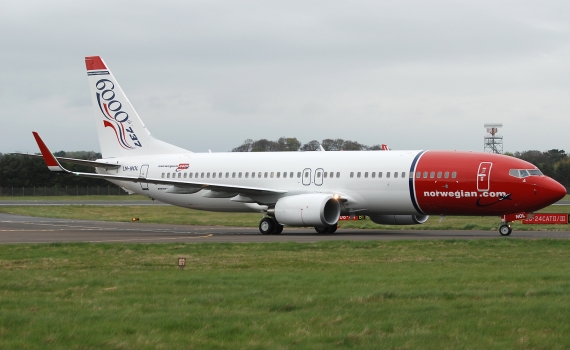 Norwegian Air has asked an Irish court to oversee a restructuring of its massive debt as it seeks to stave off collapse amid the coronavirus pandemic, the budget airline said on Wednesday.

Norway's government last week rejected the airline's plea for another injection of state funds, and the company said the following day it was at risk of having to halt operations in early 2021 unless it got access to more cash.

"The main purpose here is to come out of this process quite shortly with a company that is 'investable', where we can be attractive again for investors," Chief Financial Officer Geir Karlsen told Reuters.

The company has opted for an Irish process since its aircraft assets are held in Ireland.

Around 100 Norwegian Air staff wearing company uniform had earlier demonstrated in front of the parliament building in Oslo to demand more state support.

After growing rapidly to become Europe's third-largest low-cost airline and the biggest foreign carrier serving New York and other major U.S. cities, Norwegian's debt and liabilities stood at 66.8 billion crowns at the end of September.

It has scaled back its operations drastically, now serving just domestic routes with six of its 140 aircraft.

The airline said it would operate its flights as planned and that its bonds and shares would trade as normal.

Karlsen declined to say how many aircraft Norwegian could have at the end of the bankruptcy protection process, called "examinership" in Ireland, which lasts for up to five months. An Irish court will hear the application on Dec. 7.

"The creditors are a mix of leasing houses and banks which finance the aircraft that Norwegian owns," Karlsen said.

"We've said in the past that we may halve the size of the long-haul fleet, which remains our starting point," CEO Jacob Schram told a news conference.

Having lost money each year from 2017 to 2019, and raised new equity from shareholders three times as it hemorrhaged cash, Norwegian was seen as vulnerable even before the virus outbreak.

Included in the overall amount owed is net interest-bearing debt of 48.5 billion crowns, while Norwegian's cash holdings stood at just 3.4 billion at the end of the third quarter.

However, the government said later on Wednesday the airline was still important for both travel in Norway and tourism.

"I hope the company can find a viable solution through negotiations with creditors and owners and that this will allow it to survive," Industry Minister Iselin Nyboe said.

Leasing company AerCap Holdings, which earlier this year became Norwegian's biggest owner through a debt-for-equity swap that gave it a stake of 13.4%, said earlier on Wednesday it had cut its ownership to 9%.

Norwegian's shares were suspended ahead of the announcement, at 1239 GMT. They were trading down 0.3% at the time. (Reuters)