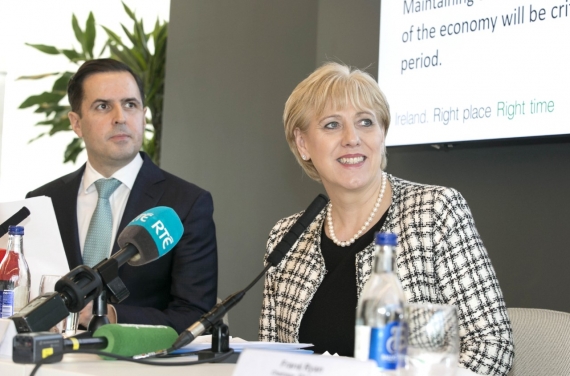 Foreign firms account for one in 10 jobs in Ireland's fast growing economy and they added a net 13,867 roles in 2019, just shy of the record 14,000 gains in 2018, IDA Ireland said in its annual labor force survey on Wednesday.

While IDA CEO Martin Shanahan said he expected the strong performance to continue in the first half of 2020, the state agency said subdued global economic growth, continued trade tensions and capacity constraints in the Irish economy posed significant downside risks over the next five years.

The list of risks in the IDA's report omitted new global rules under consideration on how and where big internet companies pay tax that could test multinationals' commitment to Ireland where they pay a low 12.5% corporate tax rate.

"Tax is permanently with us, it is part of the puzzle but I don't think we've any reason to be fearful (from the planned global changes)," Shanahan told a news conference.

"It's too early for them (companies) or us to say what exactly the impacts are likely to be and they might be very different from company to company. At the moment there is no indication that companies are thinking differently about Ireland based on anything that may be coming down the line."

Shanahan said the clearest evidence of that commitment could be seen in the 2019 jobs figures, led at the start of the year by Facebook's hiring of 1,000 more people in Dublin where its new 14 acre European headquarters is under construction.

The 1,500 jobs U.S. cloud software maker Salesforce announced it would add over the next five years was one of the largest job commitments in the IDA's 70-year history.

Half of the 250 companies that invested in Ireland last year did so for the first time, the IDA said.

However, competition for investment was strong with Shanahan identifying some countries in Eastern Europe as doing "extraordinarily well" in the race to attract multinational jobs.

He added that he found it difficult to see how neighboring Britain - already a "formidable competitor" - could become much more competitive if its exit from the European Union reduces its access to the bloc's single market.

Uncertainties around Britain's EU departure has seen close to 90 firms making Brexit-related investments in Ireland since 2016, with over 5,500 associated jobs, the IDA said. (Reuters)