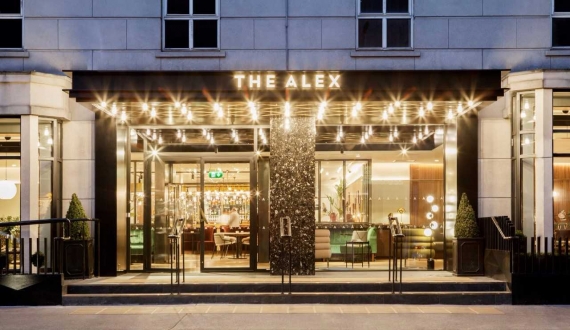 Irish-owned family-run hotel group, O’Callaghan Hotels, has today announced details of a major €100 million investment programme that is underway at its four star hotel portfolio, which includes properties in Dublin, Gibraltar and the UK.

The group’s four star Dublin hotels – The Alexander, The Davenport and The Stephen’s Green – are being completely transformed at a cost of over €30m to reposition them amongst the capital’s best hotels.  The new style of O’Callaghan Hotel will be a deluxe offering, setting a new premium standard for four star hotels in Dublin city centre.

A further significant investment is being made on The Eliott Hotel in Gibraltar while the group recently opened a new-build luxury 155-room hotel, Tamburlaine, in Cambridge.

The Group is working with a number of leading Dublin architects and interior designers including 21 Spaces and McCauley Daye O’Connell which are working on the Alex and the Davenport respectively. London-based Bryan O’Sullivan Studios, who were engaged on the design of Tamburlaine in conjunction with Opperman & Associates, have also been appointed to lead The Stephen’s Green Hotel project, which will include the rebranding of the hotel as The Green.

The transformation of the Dublin hotels is being undertaken on a phased basis to minimise disruption to guests and is scheduled to conclude next year. Work on the Alexander Hotel, off Dublin’s Merrion Square, which is being renamed the Alex, will be completed this month following extensive investment in all areas of the 103 bedroom property including its meeting and guest spaces as well as guest technology. Refurbishment of The Davenport and The Stephen’s Green Hotel begin before the end of the year.

Established in 1990, O’Callaghan Hotels is one of Ireland’s leading privately owned hotel groups. The Mont Clare was the first of the group’s hotels and was closely followed by The Davenport in 1993 and the Alexander in 1997 – all of which are located in close proximity to Merrion Square. The fourth of the group’s Dublin hotels, The Stephen’s Green Hotel, opened to guests in 2000. The group added The Eliott Hotel in Gibraltar in 1996 with the latest addition, Tamburlaine in Cambridge, UK, opening in March 2017.

Speaking of the latest investment, Chief Financial Officer at O’Callaghan Hotels, Eoin Likely said, "This significant investment programme will transform our Dublin hotels, enhancing all areas of our business to deliver an entirely new experience for our guests."