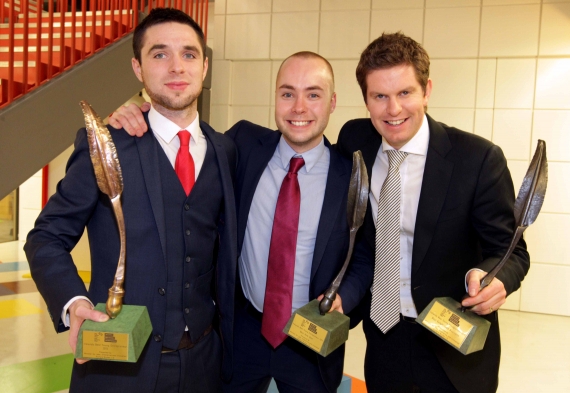 The winners of ‘Ireland’s Best Young Entrepreneur Competition' were announced yesterday by the Minister for Jobs, Enterprise and Innovation, Mr. Richard Bruton.

The nationwide competition is organised through the Local Enterprise Offices and forms part of the Action Plan for Jobs 2015 with an overall investment fund of €2 million awarded to county winners and national winners.

In all, 24 finalists from 17 counties competed for the overall title and 9 of them made a live pitch to the judging panel at yesterday’s final round at the Foundry in Google.

James Foody of Ayda in South Cork has been named as Ireland’s Best Young Entrepreneur, winning a €50,000 investment fund for his business through the Local Enterprise Offices. Foody, whose business is based in Glanmire and San Francisco, co-founded Ayda, a Female Health Tech company in 2015 after finishing his Masters in Biomedical Engineering Research.

The company’s mobile phone app is being designed to help women track fertility levels and a wearable fertility tracker solution is also being developed, for launch mid-2016.

GlowDx in the ‘Best Business Idea’ category is a diagnostics company which is setting out to diagnose neglected tropical diseases more cheaply in developing countries. Winning the ‘Best Established Business’ award, Rathwood is renowned for its year-round themed events and the retail entertainment company welcomes over 250,000 visitors every year and employs nearly 200 people.

The Google award for ‘Best Online Promotion of Business’ went to Isolde Johnson of The Cool Bean Company in Dublin City, which develops a range of healthy meals under the Cool Beans consumer brand. Each of the winners will now be offered a place at the Google ‘Adopt a Startup’ programme in 2016.

Minister Bruton said, "Two thirds of all new jobs are created by start-up businesses in their first five years. We are relying on these young entrepreneurs to start-up the businesses that will create the jobs of tomorrow, and the level of ambition and innovation on show in this competition provides great hope for the future."