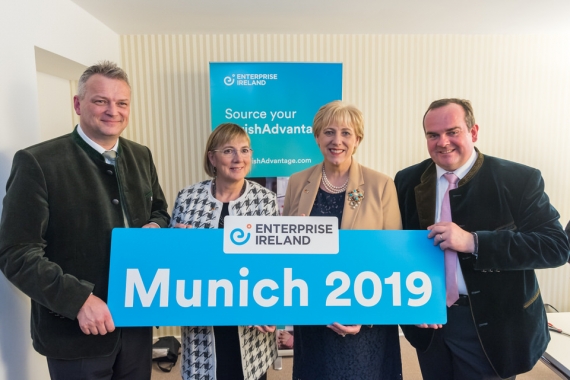 Enterprise Ireland announced last week that it is expanding its footprint in the Eurozone with two new office openings in Munich, Germany and Lyon, France.

The organisation says the opening of these new offices and additional personnel and investment in the Eurozone is a key Brexit response measure to deepen trade opportunities for Irish companies in the Eurozone. The Eurozone is the second largest market for Enterprise Ireland clients, seeing an increase in exports of 8% to €4.8 billion in 2018.

The opening of the new office in Munich will support the growth and collaboration of Irish and German companies particularly in the areas of industrial, life sciences, IT and automotive industries which are strong in the region. The new office builds on Enterprise Ireland’s presence in Dusseldorf since 1962.

The Lyon office will support Irish companies to expand into the Auvergne Rhône-Alpes region and particularly in the areas of life sciences, clean technologies and engineering. The Enterprise Ireland Paris office was first opened in 1968.

Similarly, more than 500 Irish companies are now doing business in France with exports by Enterprise Ireland supported companies to the French market increasing by 9% in 2018 to over €1 billion.

Speaking during the visit to France and Germany last week, CEO at Enterprise Ireland, Julie Sinnamon said, "This week’s office openings in Lyon and Munich align with Enterprise Ireland’s market diversification strategy which sees the agency significantly expanding our existing overseas office network. This strategy aims to support Irish companies in expanding their reach into new markets and to scale their exports into the Eurozone in preparation for the post-Brexit era."