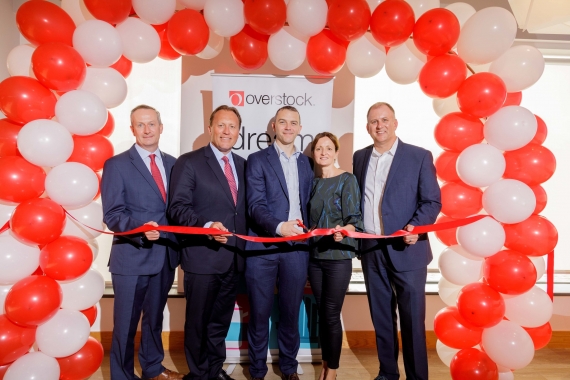 It was revealed today that E-commerce and technology leader, Overstock.com, has opened its new European base in the IDA’s flagship North West business park in Sligo, and revealed it is on track to make its 100th Irish hire before year end.

The company last year announced the creation of 100 new technology jobs including senior roles in areas such as software development and testing, machine learning and data analytics. It now has more than 80 technologists working in Sligo and is on target to recruit another 20 staff before the end of the year.

Welcoming the new expansion by Overstock, Minister for Business, Enterprise and Innovation, Heather Humphreys said, "I am delighted to congratulate Overstock on the opening of their new facility in Sligo. Their presence here is a significant boost the region, and demonstrates, once again, that we have the right skills and talent to attract quality companies. I wish Overstock well in their new home and look forward to their continued success in the future."

Overstock CEO, Jonathan Johnson added, "When we opened our Ireland office in 2013, we knew there was something special with the tech environment of Sligo. Our Irish team has been instrumental in many of our technological innovations over the years, including advancements in machine learning, augmented reality, and blockchain applications. It’s great to open the doors to a new campus the team can grow and call home."