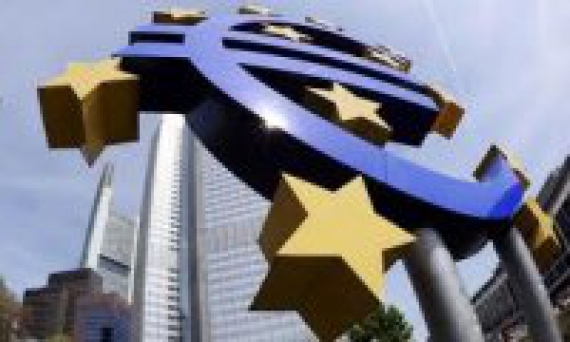 The euro recovered from initial losses today, helped by a bounce in German investor sentiment and hopes that Greece will find a common ground with its euro zone partners for support beyond its current bailout programme. Earlier, the euro had weakened after a collapse in talks to secure a new debt deal for Greece raised doubts about the country's future in the euro zone. But Greek stocks cut losses while Italian and Spanish 10-year government bond yields rose only slightly, amid hopes that a deal can be hammered out in coming weeks before Greece runs out of money. The euro rose 0.3 percent to $1.13995, not far from Monday's high of $1.1429. Against sterling, it bounced from within a whisker of a seven-year trough of 73.69 pence set last week to trade at 74.04 pence. The currency was also helped by the German ZEW survey which showed analyst and investor sentiment rose in February to its highest level in a year. "The reaction to the collapse of the talks was pretty muted. Looking beyond the headlines it appears that both the Greeks as well as its European partners are inching closer to find a solution," said Petr Krpata, FX strategist at ING. "So the market is not assigning a high probability for a Greek exit now, though the chances are rising." Talks between Greece and euro zone finance ministers broke down when Athens rejected a proposal to request a six-month extension of its international bailout as "unacceptable". The euro rose to 135.30 yen, having hit a one-week low of 133.96 yen earlier. The dollar edged up 0.1 percent to 118.52 yen, crawling away from a 10-day low of 118.11 struck in Asian trade. While the collapse of the Greek debt talks unsettled some investors, the consensus appears to still favour a last-minute deal for Greece, which faces the risk of running out of funds by month-end, when its bailout package expires. "The market has witnessed this before - it remembers the brinkmanship during the Greek debt negotiations of 2011. There are only nine trading days left until the Feb. 28 deadline but some see that as enough time. Thus we are not seeing the euro sold in panic," said Kyosuke Suzuki, director of forex at Societe Generale in Tokyo. "On the other hand, tail risk is definitely rising. This is limiting bargain hunting of the euro by short-term players." The next focus points on Greece will be on Wednesday and Friday. On Wednesday the European Central Bank decides whether to maintain emergency lending to Greek banks that are bleeding deposits at an alarming pace. And Dutch Finance Minister Jeroen Dijsselbloem, who chaired the meeting with Greece, said Athens has until Friday to request an extension. (Reuters) For more visit www.businessworld.ie