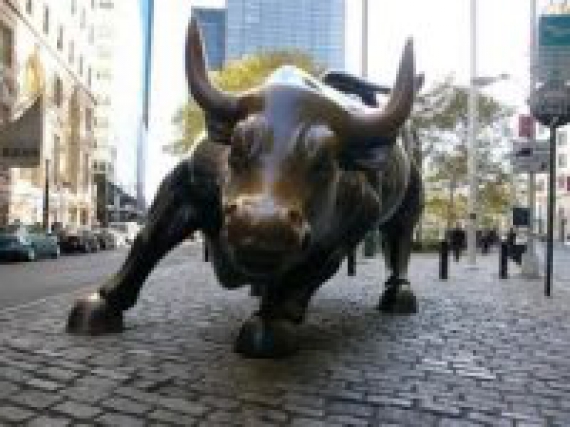 U.S. stocks were modestly lower today, a day after the S and P 500 ended above 2,100 for the first time, as investors looked ahead to comments from the Federal Reserve. Minutes from the January meeting of the Federal Open Market Committee will be released Wednesday afternoon, and market participants will scour them for hints about whether the central bank might change the language of its next policy statement to flag a possible increase in interest rates, which could come as early as June. Investors also continued to watch whether a debt deal would be reached with Greece. While the United States has little direct exposure to the country, market participants are concerned that if a deal isn't reached, volatility could spread through the euro zone. "A lot of people are focused on the Fed minutes, but that issue is kind of interwoven with the situation in Europe," said David Lebovitz, global market strategist at J.P. Morgan Funds in New York. "The massive amounts of monetary stimulus that have been deployed abroad are continuing to put upward pressure on the U.S. dollar, and I think that will make it hard for the Fed to raise rates." European shares rose 0.6 percent, hitting a seven-year high after the Greek government confirmed it would ask for an extension of its loan agreement. Shares in Greek banks rose 6 percent. Still, the situation in Greece remained uncertain, with the government in Athens also looking to renegotiate Greece's debts. U.S.-listed shares of the National Bank of Greece fell 8.7 percent to $1.48. Exxon Mobil fell 1.3 percent to $91.87 a day after Warren Buffett's Berkshire Hathaway Inc disclosed that it had shed a $3.74 billion investment in the oil major amid weaker commodity prices. Berkshire also disclosed a 5 percent stake in Deere, sending shares up 2 percent to $91.75. Crude oil fell 1.1 percent to $52.94 per barrel, snapping a three-day streak of gains of more than 1 percent. While oil is up almost 19 percent from a recent closing low, it remain down more than 50 percent since June. "While things look fairly valued in aggregate, it's too late to sell the energy sector and too early to buy it," Lebovitz said. Fossil Group Inc sank 16 percent to $83.05 after the fashion accessory maker reported quarterly earnings and revenue below expectations. Garmin Ltd fell 8.2 percent to $52.33 after the navigation device maker gave an earnings outlook below estimates. The Dow Jones industrial average fell 35.93 points, or 0.2 percent, to 18,011.65, the S and P 500 lost 3.56 points, or 0.17 percent, to 2,096.78 and the Nasdaq Composite dropped 0.04 points, or 0 percent, to 4,899.23. (Reuters) For more visit www.businessworld.ie