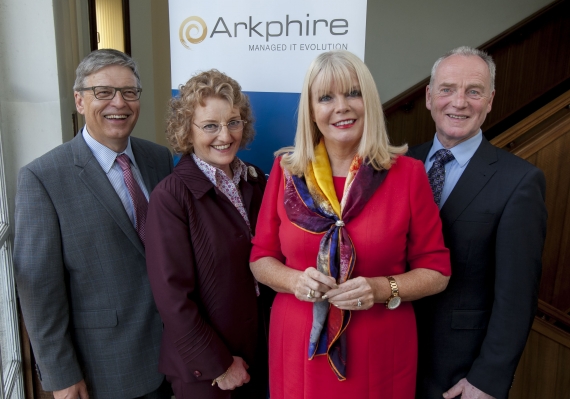 The Minister for Jobs, Enterprise and Innovation, Mary Mitchell O’Connor today joined forces with leading Irish owned IT services and networking company, Arkphire, to highlight the importance of having a strong local IT sector to support the growing numbers of foreign direct investment companies, now locating in Ireland.

This business has enabled Arkphire to achieve annual revenues of over €55 million and employing 71 people to date.

The company is gearing for further growth in supporting the multinational sector in Ireland and has ambitious plans to achieve 50% in revenue and profitability by the end of 2017 with a further 35 people to be recruited over the next two years.

Arkphire's success to date has been built largely on the company’s ability to service the IT needs of multinational enterprises, providing a range of services from IT procurement through to infrastructure build and managed services.

Minister Mary Mitchell O'Connor commented, "Arkphire is a great example of the positive knock on effect that follows when foreign direct investment is announced. New jobs emerging from FDI organisations are in turn leading to new jobs in local indigenous companies – which remains the largest growth area in the Irish jobs market."

She added, "Local specialist IT services companies, such as Arkphire, play a very positive role in enhancing Ireland’s reputation as an effective place to do business, offering world class solutions in terms of skills, products and services to support incoming enterprises."