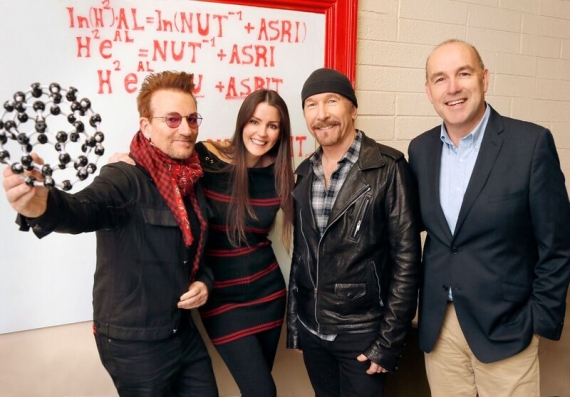 Nuritas, the Irish digital-biotechnology and R&D company founded by Dr. Nora Khaldi, has announced it will triple its workforce in Ireland to over 60 in 2017 as part of a major expansion of its Irish operations.

The company has also confirmed U2 band members Bono and The Edge as investors in the company. Bono and The Edge recently visited Nuritas’ offices in Dublin to mark the announcement of the Irish expansion as well as further growth of its US-based operations.

Founded in 2014 by mathematician and computational biologist, Dr Nora Khaldi, Nuritas is an Irish headquartered biotech company that uses artificial intelligence, deep learning and DNA analysis to predict and provide access to the most health-benefiting components hidden within food called peptides that can manage and improve human health.

Nuritas says the additions to its workforce in Ireland will include roles across R&D, business development and other key support functions to drive global growth across many major health areas. Nuritas will continue to base its headquarters in Ireland but also plans new hires and expansion of its US operations following on from the recent opening of its first US office in San Francisco in 2016.

Bono and The Edge, early investors in Facebook and Dropbox amongst others, are the latest high profile investors to be confirmed by Nuritas as part of their seed round investment, which closed earlier this year.

Today’s announcement comes after Nuritas’ recent award of €3M in EU and associated funding to help bring to market a breakthrough food ingredient, considered a potential world-first in diabetes prevention, for which clinical trials are commencing shortly.

Speaking recently at Nuritas’ headquarters in Dublin, the Edge said, "When we first started talking with Nuritas, I was blown away with how their ideas could be used to significantly improve the health of billions of people globally."

He added, "Using cutting-edge technology and really smart approaches to identify disease-beating peptides in food is something that has never been done before. To see this team unlock what nature has already created for the betterment of mankind, it’s just incredible. We want to bring forward and support innovative, world-changing ideas so this is a perfect fit."