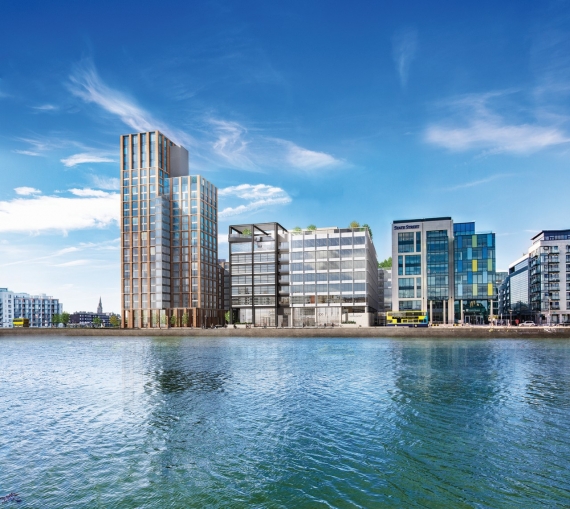 According to the report, the first half of 2017 has been very busy albeit a ‘different kind of busy’ compared to the phenomenal performance of the commercial real estate market between 2014 and 2016.

Investor demand remains strong, encouraged by activity in each of the various occupier markets, to the extent that CBRE expect to see some price sharpening for prime investment assets over the coming months.

According to CBRE, the volume of transactional activity in some sectors such as hotels and investment is down year-on-year due to the smaller lot sizes being offered for sale compared to the large assets and portfolios that traded in recent years.

The report shows there have been a number of significant lettings in Dublin office buildings that are still under construction over recent months, demonstrating that occupiers are more comfortable committing to schemes when there is clear visibility on delivery.

There has been some softening in demand from new entrants in the first half of 2017 with the majority of the larger office leasing transactions that have signed in the first half of the year comprising expansions and relocations of existing occupiers. Financial services firms, business services and technology firms have been particularly active.

According to CBRE, there are 31 office schemes under construction in Dublin at present, extending to more than 380,000 square metres between them, with more than 30% of this total stock already pre-let. Meanwhile, 44% of the office stock due for completion during 2017 specifically has already been pre-let - a proportion that is going to increase further as other lettings sign over the next couple of months.

Meanwhile, in Cork, CBRE research shows that although there are 20 office schemes at various stages of the planning process at present, there are only 3 office schemes physically under construction in the city, of which the only speculative scheme is 13,161m2 at Block A, Navigation Square, which is due for completion in 2019.

In addition to the €492 million of investment sales completed in the first quarter of 2017, there is up to €1 billion of investment transactions currently in play and several assets being prepared for sale which suggests a relatively healthy volume of transactional activity will be recorded in 2017, albeit down on the phenomenal volumes of investment achieved during 2015 and 2016 when some sizeable portfolios and large shopping centres changed hands.

CBRE say that the scarcity of large sites being offered for sale is frustrating considering the number of investors looking to deploy capital in the Irish market at present.

Commenting on the research, Executive Director & Head of Research at CBRE Ireland, Marie Hunt said, "Despite somewhat of a slow start to the year, the first half of 2017 overall has been very busy and there is currently a large volume of deals underway in all sectors of the commercial property market as well as several assets being prepared for sale. This bodes well for an even better second half performance although year-end totals will invariably depend on the volume of transactions that sign by year-end. Despite continued uncertainty around Brexit, it is encouraging that activity has continued at pace in all sectors regardless."

She added, "Aside from Brexit uncertainty, the scarcity of housing in the Dublin market remains one of the biggest issues facing the market, and indeed the Government at this juncture. I would imagine therefore that efforts to increase housing supply are likely to be a core focus for the new Minister for Housing over the coming months."