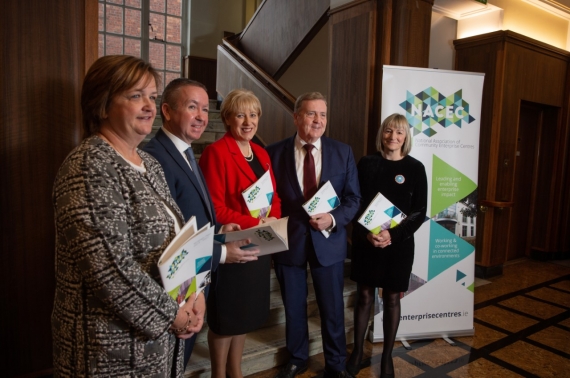 In a major survey conducted as part of a new national strategy launched by the National Association of Community Enterprise Centres (NACEC), some 60% of the group’s members believe Britain’s departure from the European Union presents an opening to lure small UK and Northern Ireland companies to their centres as tenants.

A majority of community enterprise centres around the country don’t consider Brexit a threat but rather an opportunity to attract relocation businesses to their areas. NACEC plans to specifically target Brexit relocations from both regions through a collective marketing drive.

The association, representing enterprise centres across Ireland which offer small firms and start-ups shared facilities such as enterprise, innovation or technology hubs and coworking spaces, has developed a roadmap for the future growth of the sector and is implementing a significant change management programme to steer the organisation forward.

NACEC’s members support over 5,500 jobs in over 1,800 tenant business throughout the regions, with a wages contribution from these jobs put at €247.5 million per annum. The association’s new plan, launched by the Minister for Business, Enterprise & Innovation, Heather Humphreys, TD, outlines a number of strategic goals aimed at providing a progressive enterprise support environment through the establishment of nine regional clusters aligned to Enterprise Ireland’s regional structure.

The association believes it is uniquely placed to play a strategic role in Enterprise Ireland’s Powering The Regions Co-Working initiative to support 10,000 co-working and incubation spaces in regional locations by making co-working a viable option for many office-based workers and reducing commuting times.

In 2018, its members received over 1,200 individual enquiries concerning business starts – an average of 30 per enterprise centre. From January to June of this year, enquiry levels were up 15% on 2018.

In terms of investment, 63% of centres have firm capital investment or growth plans within next two years, including the development of digital and co-working hubs, acquiring publicly owned buildings to convert into enterprise spaces and increasing centre size.

Welcoming the initiative, Minister for Business, Enterprise & Innovation, Heather Humphreys said, "Balanced regional development is a key priority of mine as Minister. That is why I would like to congratulate the National Association of Community Enterprise Centres on the launch of their new national strategy. I warmly welcome their plans to establish nine regional clusters that will provide a networking platform for both established and newly emerging enterprise centres to support employment in the regions."