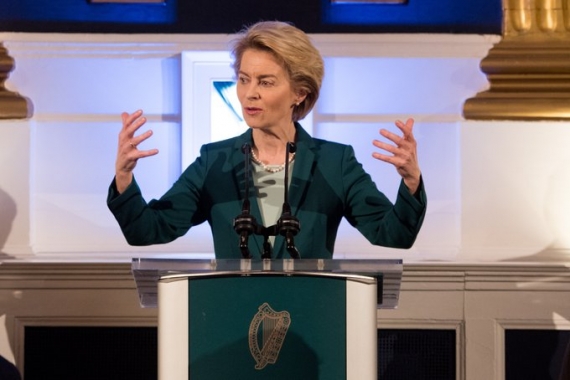 Unveiled on Wednesday, the fund is to comprise 500 billion euros in grants and 250 billion euros in loans, designed to help the most vulnerable European Union states recover from the deep economic scars left by the epidemic.

If member governments approve the plan, the EU would borrow 750 billion euros on the markets to finance the fund, a nearly 15-fold increase on its current bond debt pile and making it the region's leading supranational borrower.

The lack of a true benchmark asset has dented the euro's role as a reserve currency and accentuated member states' varying fortunes at times of crisis.

The recovery fund debt won't on its own be able to rival the region's current fixed-income instrument of reference, Germany's trillion euro bond market, but it might form the basis of an issuance program that eventually could.

Both Germany and the EU are rated Triple A, the highest credit rating.

"The risk premium would be very low for this bond. This would actually help to form this foundation of a larger safe asset than the Bund in the euro zone," said Ludovic Subran, chief economist at Allianz in Munich.

The fund proposal also suggests a one-off issuance of debt maturing between 2028 and 2058, though a true safe-haven benchmark would need to be part of a continuous issuance program across several maturities.

"Even though this is temporary, the fact is that when the next crisis comes along, this facility will be used again. So, something that's temporary can become permanent," said Peter Chatwell, head of multi-asset strategy at Mizuho.

The recovery fund would mean states like Italy - which will receive 82 billion euros in grants and 91 billion in loans - would be likely to issue less of their own, higher-cost government bonds.

They would be replaced by low-cost EU borrowing instead - a mechanism that could build on EU issuance in future crises.

"The most important thing here is the precedent that it sets and the fact that there is a mechanism to allow these kinds of transfers to take place," said Mark McDonnell, a macro analyst at Invesco, which manages $1.05 trillion, referring to the net benefit to states worst hit by the virus.

They are expected to contribute less money to the EU budget than the grants they receive when it's time to repay the debt, leading investors to see the fund as step closer towards an EU fiscal union.

"For countries that are finding it difficult to issue their own debt at elevated levels, it maybe allows them in the future to conjoin to issue common debt," said Craig Inches, head of short rates and cash at Royal London Asset Management, which manages 114 billion pounds. (Reuters)