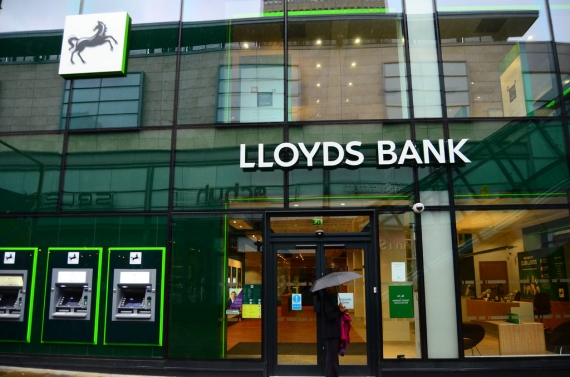 Lloyds Banking Group swung to a rare pretax loss in the first half of 2020, after setting aside a bigger than expected 2.4 billion pounds second-quarter provision to cover a potential hike in bad loans due to the coronavirus.

The hefty provision, which was 60% higher than an average of analyst estimates, came as it drastically revised its models for the worst-case scenario for Britain's economy as it grapples with the fallout from the pandemic.

The United Kingdom's biggest domestic bank, seen as a bellwether for the wider economy, said it had adopted a gloomier outlook and estimated the impact of lockdown measures was "much larger" than previously forecast.

It said Britain's GDP could shrink by 17.2% over the year, compared with a 7.8% fall previously modeled as the worst-possible outcome at Lloyds' first quarter results in April.

Under new accounting rules known as IFRS9, banks have to disclose these best-to-worst case economic forecasts, which they weight according to probability and use to determine how much to set aside for loan losses.

The fresh charge pushed Lloyds' provisions for the first half to 3.8 billion pounds, resulting in a pretax loss of 602 million pounds.

Lloyds said it had lent more than 9 billion pounds to businesses through varied government-backed relief schemes and granted more than 1.1 million payment holidays to consumers hit by the pandemic, but its support of these customers "will have a cost to the group."

Major banks across Europe have been counting the cost of likely bad loans due to the pandemic this week, with Spain's BBVA also setting aside extra provisions on Thursday.

Lloyds' domestic rival Barclays booked a higher than expected 1.6 billion pound provision on Wednesday, while a big charge at Spain's Santander dragged it to a record quarterly loss.

Lloyds' loss compared with pretax profits of 2.9 billion pounds last year. The bank posted a statutory post-tax profit of 19 million pounds, largely due to tax credits earned on some of its most valuable assets.

Its net interest margin - a key measure of lending profitability - sunk by 20 basis points to 2.59% in the three months to end-June, as interest rates hover just above zero and demand for loans and mortgages wilts.

Income for the half-year fell by 16% to 7.4 billion pounds in line with expectations.

The lender is searching for a new CEO to help steer it through the economic fallout from the pandemic, after António Horta-Osório said earlier this month he would step down by next year after a decade leading the bank.

Horta-Osorio told reporters he had no current plans for what he would do after leaving Lloyds and planned to present a strategy update in February. (Reuters)