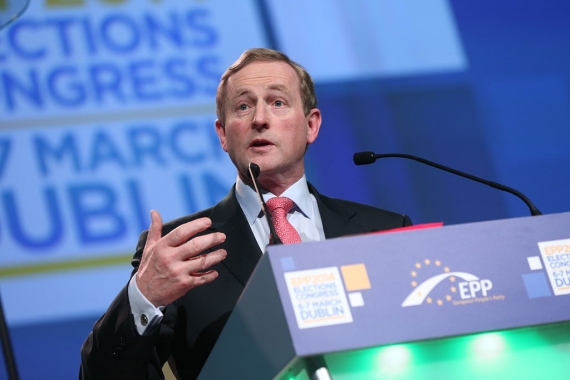 The five largest U.S. investment banks are set to move hundreds of key staff within two years from London to Frankfurt, the city's chief lobbyist told Reuters, in a move that could bolster Germany's role in global finance.

Hubertus Vaeth, who has been promoting the city to banks since Britain voted to leave the European Union last year, told Reuters he expected a "significant chunk" of their operations to come to Frankfurt.

"That means, in the case of JP Morgan, Morgan Stanley, Goldman Sachs, Citigroup and Bank of America a move of more than 1,000 jobs in total to Frankfurt, which will happen by the end of Brexit talks," said Vaeth, who heads Frankfurt Main Finance.

Vaeth's remarks come as rival centers, chiefly Frankfurt, Dublin, Paris and Luxembourg, make a final push to win banks searching for a foothold in the European Union after Britain's departure limits their freedom to trade.

Frankfurt, which long grappled with an unfavorable backwater image, promotes itself as a stable city for banks seeking to relocate, while the German government and politicians have discreetly welcomed those looking to move.

As uncertainty has grown in the wake of a snap election in Britain, and as talks between British Prime Minister Theresa May and her counterparts in Brussels got off to an acrimonious start, Germany's steady, if sometimes grey, image holds appeal.

For executives worried about further political uncertainty in the euro currency bloc, the city's location in the region's strongest economy has helped.

Vaeth conceded that rival Dublin would also benefit, hosting possibly even more staff from the banks. But he believes they will be primarily in administrative or back-office functions.

As in Germany, Ireland's politicians have taken an active role in the campaign.

Taoiseach Enda Kenny met senior Morgan Stanley executives in New York to discuss locating in Ireland during a visit to there to mark St. Patrick's Day in March, one person familiar with the matter said.

"The decisions on moving location have been taken, more or less," said Vaeth. "And it is usually two to three locations that will benefit.

"Key operations and decision-makers would come to Frankfurt. Dublin would mainly get middle and back office operations."

He said 20 banks were now in advanced talks with the regulators about getting a license in Germany.

Some of the banks, however, have yet to finalize their plans. Citigroup, for example, has said it will decide by the end of June.

Morgan Stanley, whose chief executive James Gorman recently visited Frankfurt, and Goldman Sachs prefer Germany's financial capital as their main base. But JP Morgan has indicated that the split with rival centers may be more even.

Bank of America has far closer ties to Dublin, where until recently it booked much of its trading, and where it still has a license. One of its executives has said the Irish city is its default option as an EU base.

Ireland continues to canvass for Dublin and one person with knowledge of the matter said Dublin remained in contention for any operations that Morgan Stanley chooses to move.

Christian Noyer, the former French central bank chief tasked with promoting Paris to banks, will travel to New York later this month to make the case for doing business there. (Reuters)