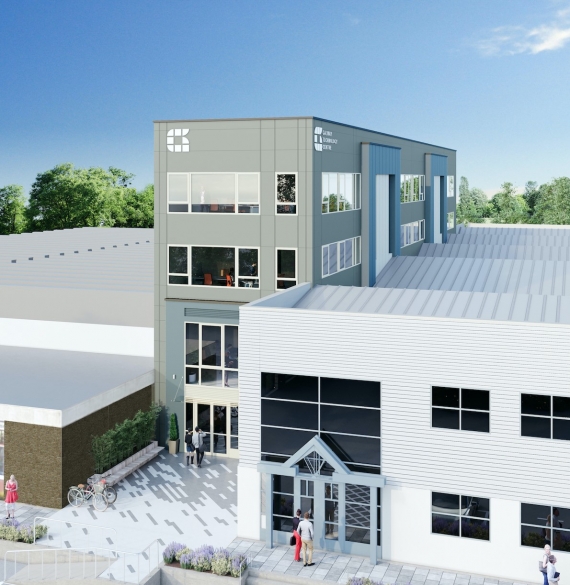 The Taoiseach Micheál Martin last week placed a ceremonial stone marking the building of the new extension at Galway Technology Centre (GTC). The project, which is being comprehensively facilitated by Enterprise Ireland, will see an additional 15,500 square feet added to the centre, bringing the total area to 65,500 square feet. The extension will also see the number of floors in GTC grow from two to four.

Galway Technology Centre is a social enterprise which is jointly owned by Galway Chamber and WestBIC. It became the first technology innovation centre in Ireland when it first opened in 1994, following the closure of Digital Equipment Corporation’s Galway facility.

In response to the closure of Digital, who at the time were Galway’s largest employer, a special Government Task Force was established who invited Galway Chamber, WestBIC and An Forbairt to realise their vision of an indigenous ICT cluster in the west of Ireland. This led to the formation of GTC. Since the mid-nineties, the footprint of GTC has been regularly extended to address the growing needs of ICT companies in the region. Over that time it has housed more than 300 companies who have created in excess of 3,000 jobs. Currently there are 41 companies in GTC with over 325 people employed directly on site and thousands more in the other satellite offices of these enterprises located in Ireland and abroad.

It is estimated that the enhanced centre will facilitate the creation of a cumulative total of 12,500 jobs over the next 15 years, along with estimated investment of €1.4 billion. According to GTC, the development highlights the flourishing of scaling enterprises in the west of Ireland and the increased demand for space to facilitate their growth in the region.

Speaking at the ceremony to mark the extension, Taoiseach Micheál Martin TD said, "Since its inception, Galway Technology Centre has played a central role in enabling the growth of scaling enterprises across the west of Ireland. It has provided numerous start-ups and high potential businesses with the space and support they needed in order to flourish and prosper. The centre has come a long way from its first opening in the mid-nineties, when there were eight units filled by seven start-up companies. In the years since they have developed alongside the enterprises they have supported, providing greater space and resources as the need for their service has grown. Galway Technology Centre’s new extension, supported by the Government through Enterprise Ireland, will see their positive contribution to scaling companies in the west extend even further, enabling both their impact and the centre itself to reach new heights."

GTC CEO, Oliver Daniels added, "Galway Technology Centre has been rooted in supporting the development of scaling enterprises in the west of Ireland since its inception. That was our founding principle and it will continue to be the driving mission behind our centre. We exist to enable the growth of scaling ICT businesses and high potential start-ups. Our purpose is to meet their needs. That is why this project represents a lot more than just an extension. It highlights how scaling enterprises in Galway and the west are flourishing and the increased demand for space to facilitate that growth. Through this extension Galway Technology Centre will be able to assist even more thriving companies, bringing more dynamic enterprises to our centre as well as further nurturing those who already call GTC home."