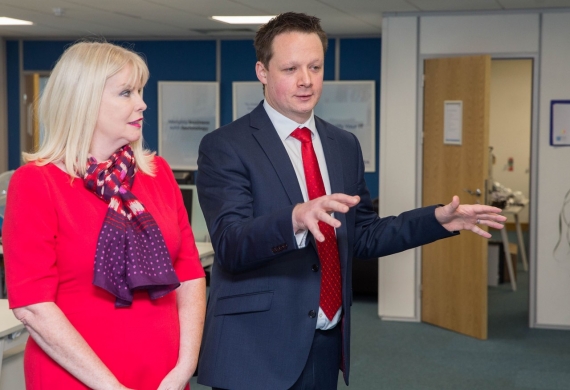 The company was established by Kevin O’Loughlin along with Gary Byrne, Senan Finucane and Barry O’Loughlin in 2006 and has grown rapidly in the last number of years.

The business has grown from just four staff in 2006 to 75 people in 2016 with 50 new positions to be filled over the next three years.

In 2016, the company turned over €7 million and it is currently in the second year of a 5-year plan to achieve a turnover of €25 million with 147 jobs by 2020. To meet this expansion, Nostra recently extended its headquarters and has just completed a full renovation and state-of-the-art 9,000 sq. ft. facility which was unveiled today by the Minister for Jobs, Enterprise and Innovation, Mary Mitchell O’Connor T.D.

The new look facility at Nostra’s headquarters in Lucan, Co. Dublin includes new office spaces, a 24-hour helpdesk, a state of the art IT Build Room, boardrooms, meeting rooms, a dedicated field and internal sales team area and a café.

Recruitment for the new positions with the support of Enterprise Ireland will begin immediately and includes roles for computer engineers and sales personnel who will be required to service recent client wins and support the growth of new international business.

Speaking today, Minister Mitchell O’Connor said, "SME’s are the backbone of our economy and are creating jobs right across all regions of our country. They are filled with innovative, hardworking entrepreneurs. I am delighted that Nostra, an Enterprise Ireland supported company which started its life with just four people working out of what was essentially a shed in an industrial estate has now grown to be an international player on the world stage. I would like to congratulate Kevin O’Loughlin and his team for their hard work and vision and wish them the very best in their endeavours."